What is a Coffee Enema?

The coffee enema was recorded as early as 1917 and was recommended in the prestigious Merck Manual until the mid-1970s. In the 1920s, German scientists claimed that a caffeine solution could open the bile ducts and stimulate the production of bile in the liver of experimental animals. The CAM pioneer Max Gerson, MD, used this clinically as part of his detoxification regimen. The effects of caffeine, he postulated, travel upward to the liver. He noted that patients could dispense with pain-killers once on the enemas. Many people have noted a paradoxical calming effect. But while coffee enemas can relieve constipation, Gerson emphasized: "Patients have to know that the coffee enemas are not given for the function of the intestines but for the stimulation of the liver."
Dr. Ralph Moss

The process of administering the standard enema and the coffee enema is identical, but, each serves a completely different function. The standard enema, using water or saline solution, is used to relieve constipation. It is worth mentioning, however, that until about 40 years ago, the standard enema was used as a home remedy for regular intestinal cleansing, and not strictly as a prescription for constipation. Ask your grandmother.
The purpose of the coffee enema, on the other hand, has nothing to do with the bowel; its purpose is to cleanse and fortify the liver.

Coffee enemas offer a simple, practical and safe solution for ridding the body of toxins, as well as providing protection against harmful agents.

Why is S A Wilsons coffee recommended over organic store bought coffee? 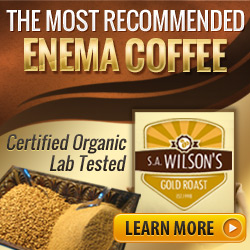